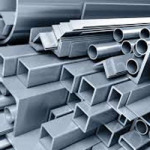 Steel is an alloy of iron and carbon that is widely used in construction and other applications because of its high tensile strength and low cost. Carbon, other elements, and inclusions within iron act as hardening agents that prevent the movement of dislocations that naturally exist in the iron atom crystal lattices. 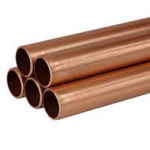 Copper is a chemical element with symbol Cu (from Latin: cuprum) and atomic number 29. It is a ductile metal with very high thermal and electrical conductivity. Pure copper is soft and malleable; a freshly exposed surface has a reddish-orange color. It is used as a conductor of heat and electricity, a building material, and a constituent of various metal alloys. 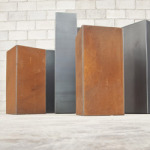 Corten Weathering steel, best-known under the trademark COR-TEN steel and sometimes written without the hyphen as “Corten steel”, is a group of steel alloys which were developed to eliminate the need for painting, and form a stable rust-like appearance if exposed to the weather for several years.[1]U.S. Steel holds the registered trademark on the name COR-TEN.[2] Although USS sold its discrete plate business to International Steel Group (now Arcelor-Mittal) in 2003,[3] it still sells COR-TEN branded material in strip-mill plate and sheet forms. 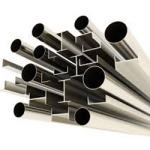 Aluminium (or aluminum; see spelling differences) is a chemical element in the boron group with symbol Al and atomic number 13. It is a silvery white, soft, ductile metal. Aluminium is the third most abundant element (after oxygen and silicon), and the most abundant metal in the Earth’s crust. It makes up about 8% by weight of the Earth’s solid surface. Aluminium metal is so chemically reactive that native specimens are rare and limited to extreme reducing environments. Instead, it is found combined in over 270 different minerals.[5] The chief ore of aluminium is bauxite. 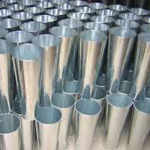 Zinc, in commerce also spelter, is a chemical element with symbol Zn and atomic number 30. It is the first element of group 12 of the periodic table. In some respects zinc is chemically similar to magnesium: its ion is of similar size and its only common oxidation state is +2. Zinc is the 24th most abundant element in the Earth’s crust and has five stable isotopes. The most common zinc ore is sphalerite (zinc blende), a zinc sulfide mineral. The largest mineable amounts are found in Australia, Asia, and the United States. Zinc production includes froth flotation of the ore, roasting, and final extraction using electricity (electrowinning).